When I first read a travel article regarding about temples in Pattaya, there is one that particularly caught my attention: a temple made entirely of wood. Guess what? It has no metal nails in it whatsoever. The temple in question is called the Sanctuary of Truth, or otherwise known as Prasat Sut Ja-Tum. In Thai language, it literally means as “castle philosophy”. 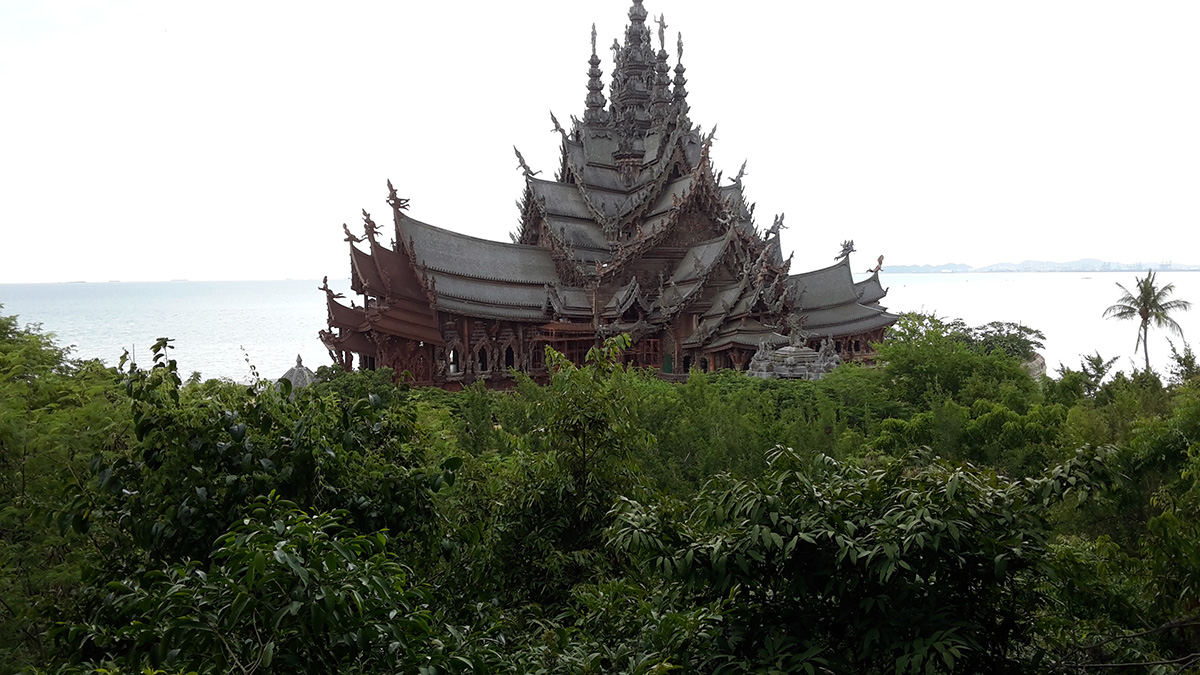 So on my 2nd day in Pattaya after a memorable visit at Mini Siam, I decided to choose Sanctuary of Truth as my next destination. Instead of a taxi, I took a songthaew for a change instead. In case you’re wondering what songthaew is, it’s actually a pick-up truck with two rows of seats at the back. The songthaew ride only cost me about 10 baht, and it’s a very affordable deal. The ride didn’t stop exactly in front of the temple, but rather at Naklua Soi 12. The other passengers (mostly tourists anyway) and I had to walk about 15 minutes or so. The weather was hot and humid, typical of Thailand, but it was definitely better than a rainy and I was sure that the walk would be much worth it. 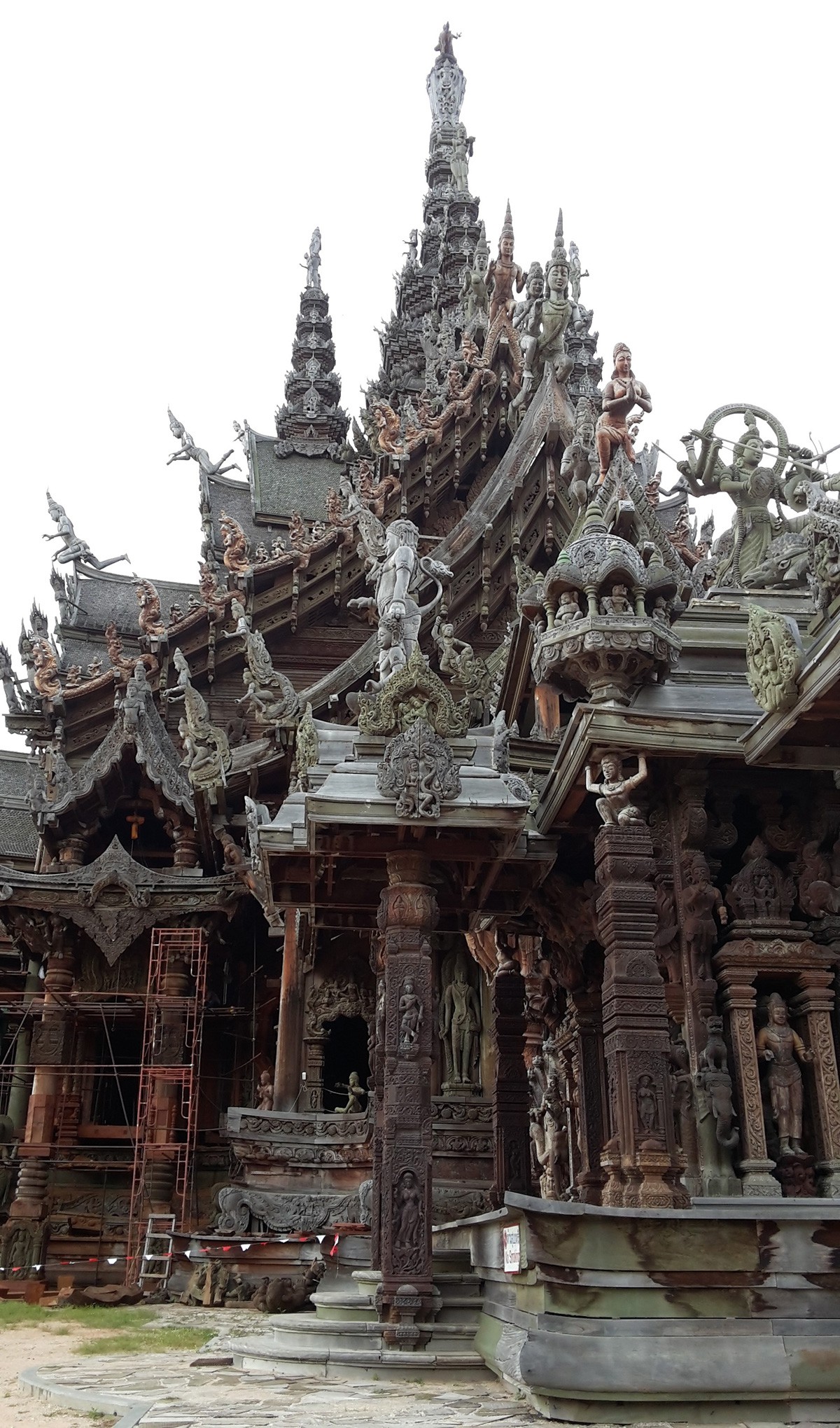 After 15 minutes, I was finally at the Sanctuary of Truth. I also came to learn the temple only allows a certain batch of tourists every half hour. I guess they set such rule to avoid the temple from being overcrowded.

When it was finally the turn for myself and my fellow songthaew mates, we are given three choices to make our way down to the Sanctuary of Truth itself. It’s either a horse ride, elephant ride or we can walk down the wooden steps from the Vantage Point. I chose the elephant ride, which only allows two persons sitting at the back. The ride took me about 30 minutes or so, going around the Sanctuary of Truth for a grand preview of the exterior. 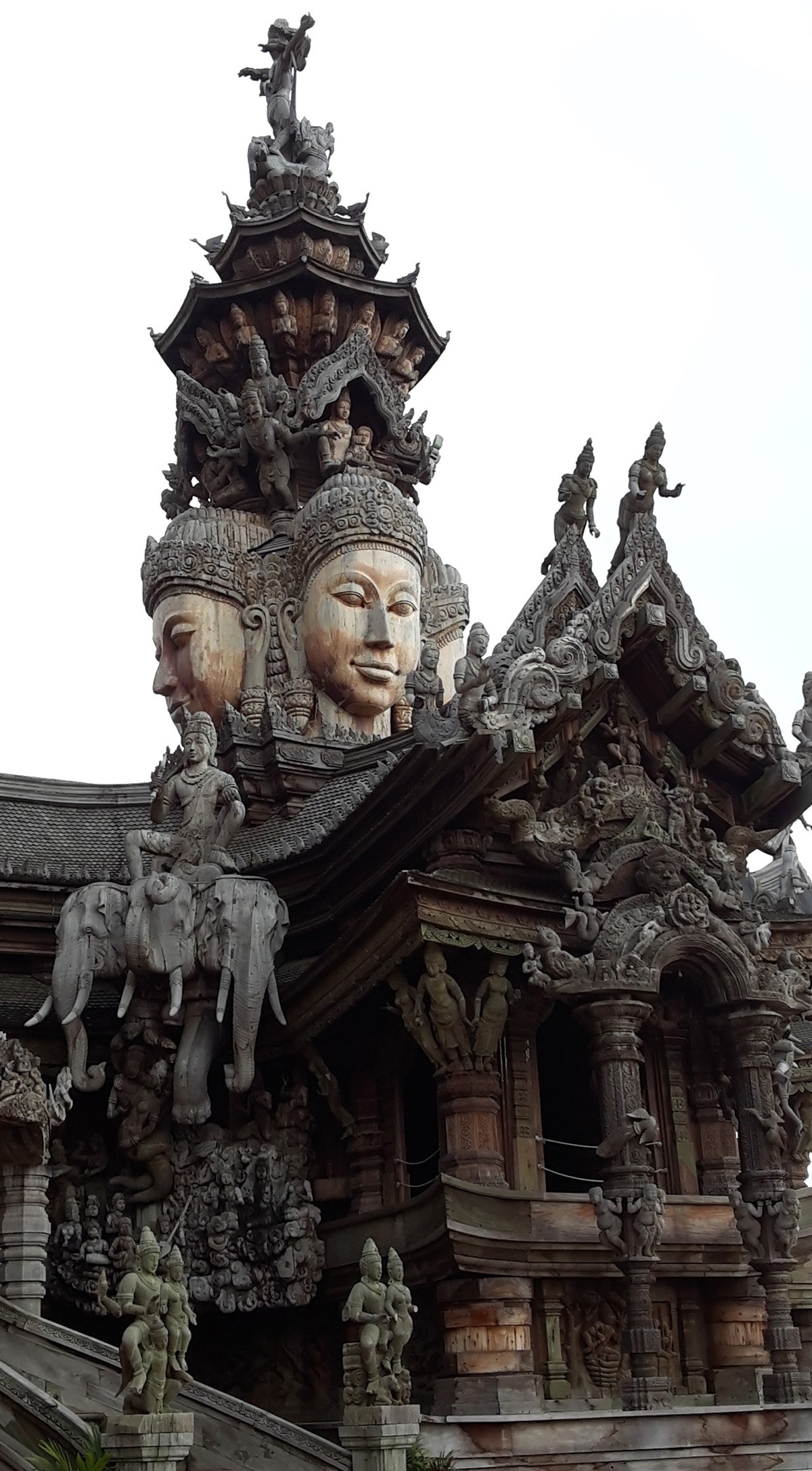 The Sanctuary of Truth is no doubt a majestic sight to behold. I truly admired the meticulous craftsmanship and architecture of this all-wooden temple. There are plenty of intricate wood carvings of both Hindu and Buddhist gods as well as goddesses. The carvings adorn every inch of the walls and even the ceiling. I just stood there, gaping in awe at the splendid and meticulous craftsmanship. 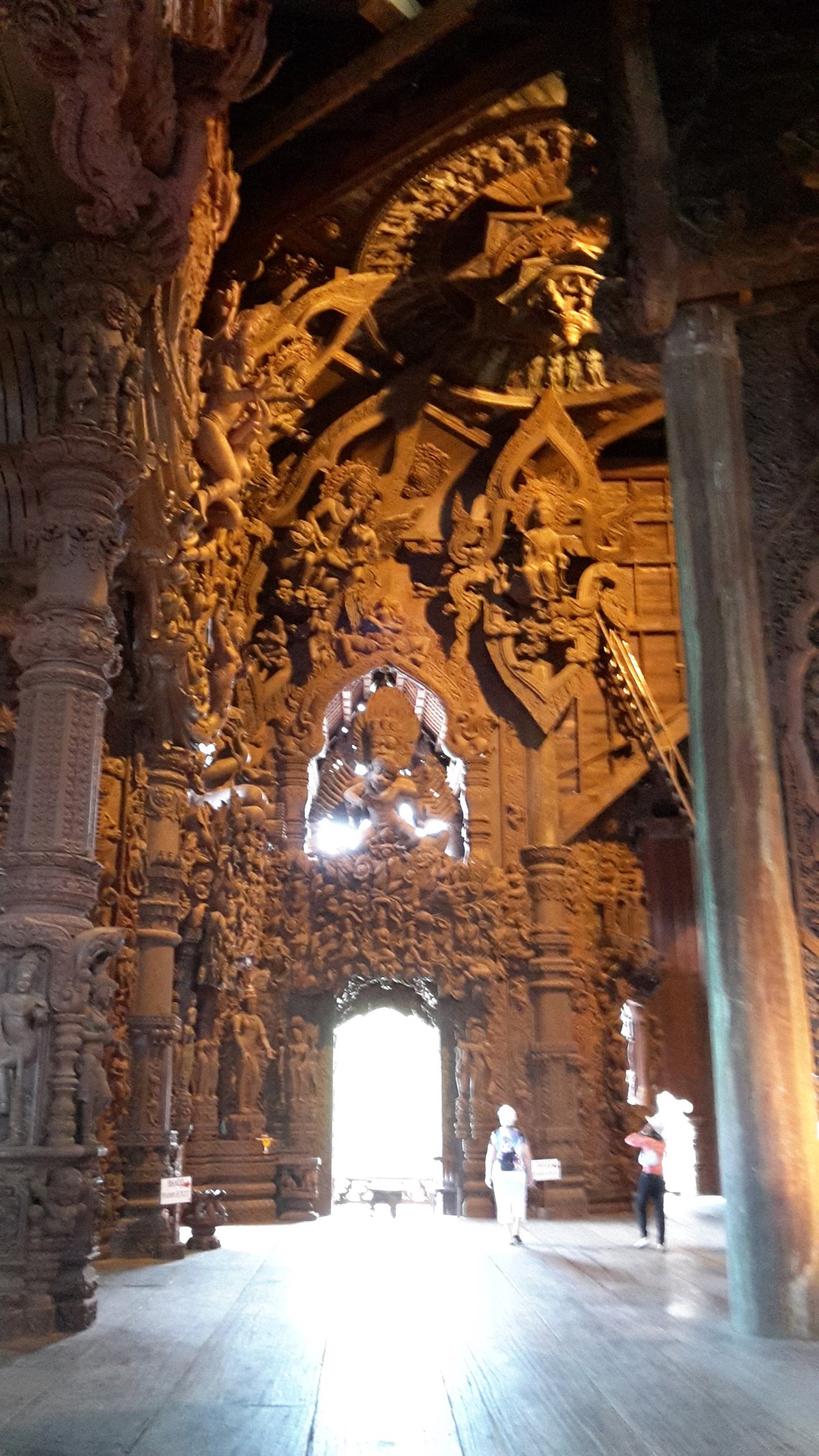 Part of the temple was sealed off, with scaffoldings. I thought it hampered the beauty of the temple but soon I learnt that the temple isn’t actually fully complete – more is to come! I spoke to guide staff and learnt that the works commenced in 1981 and is slated to complete by the year 2025. Looking at how intricate the handiwork is, there is no doubt that it would indeed take a long time to completely furnish the temple. I also learnt that funding of the works come from local businessmen who staunchly believe in upholding the values of religion and tradition.

Apart from sightseeing, there are loads of activities you can do at the Sanctuary of Truth. You can witness the local craftsmen carving wooden sculptures just outside the temple. There was a traditional dance and fight show halfway on when I arrived but the crowd had gathered and I couldn’t see much of it. 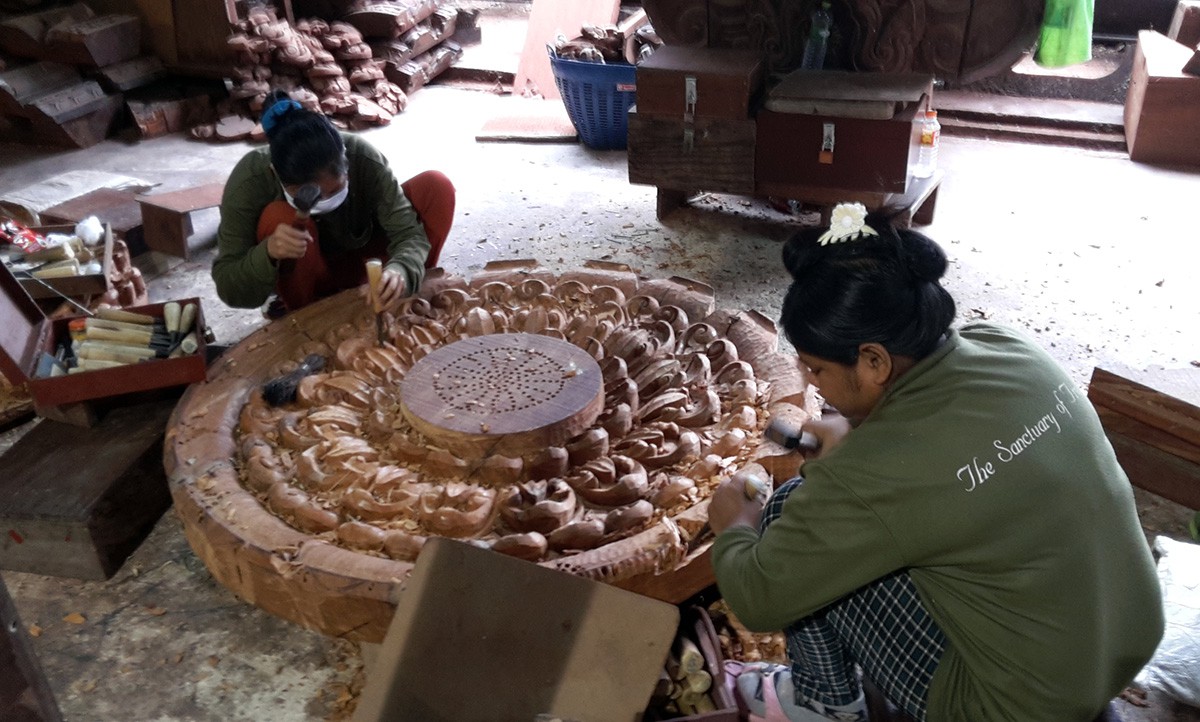 There’s even a dolphin show twice a day ta the lagoon by the temple, at 11.30 a.m. and 3.30 p.m. each day Best of all, the show is free of charge. When the heat of Thailand starts to bore into you, sip coconut water or have an ice-cream at the little F&B spot by the stream just outside the Sanctuary of Truth entrance. 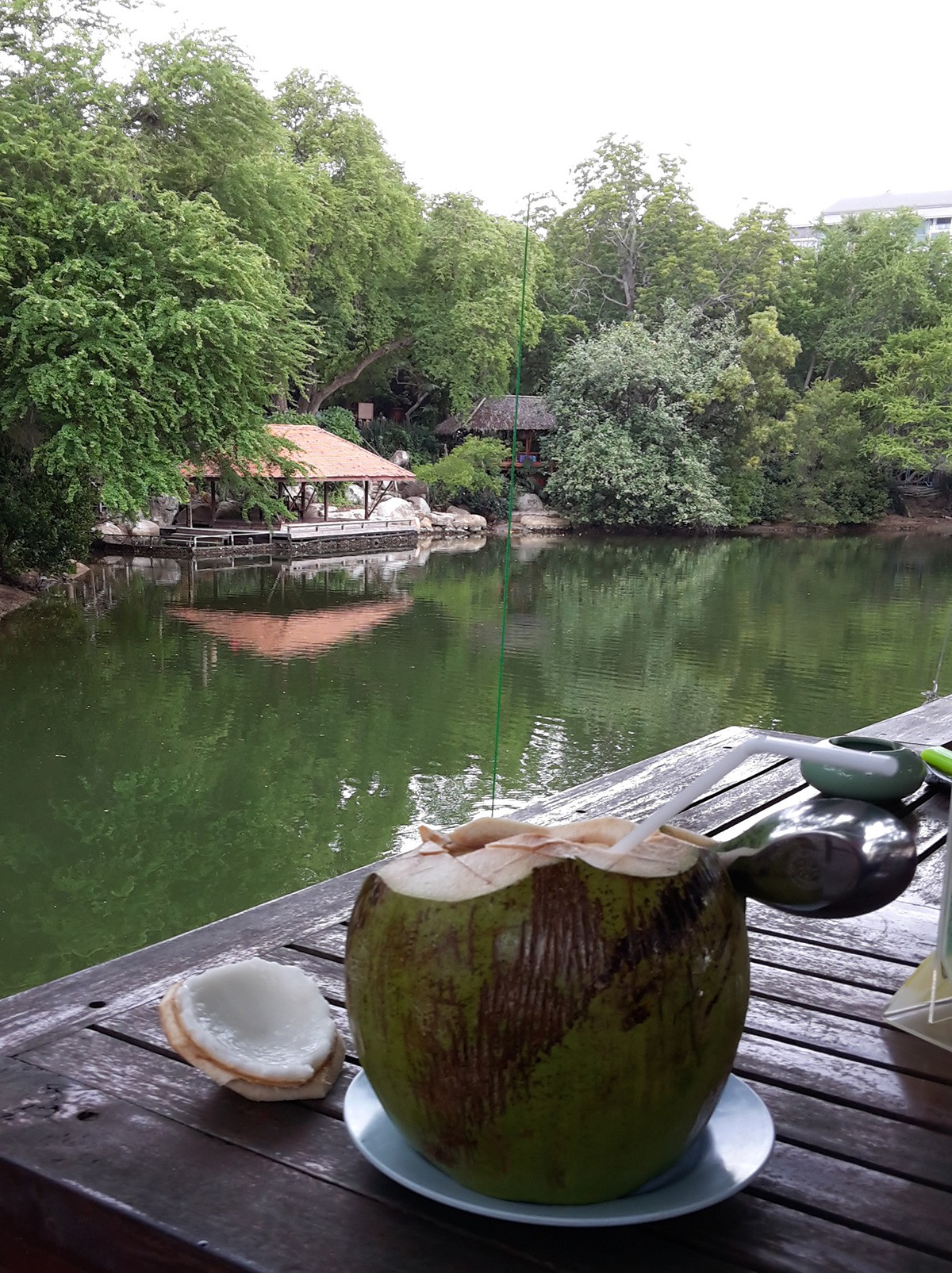 On top of that, you can visit the shark-feeding pool. Even though they are not like Great White Shark, they are still dangerous if you fall from the designated feeding platform! If you have a need for speed, you’re in luck because they also provide an ATV (all-terrain vehicle) ride. The rest of the activities you can look forward to include a shooting range and scaling wall.

Keep in mind that ladies must be modestly dressed when you visit. If you’ve come in shorts, don’t worry as there is a booth by the entrance that will let you have a sarong – you’ll just need to leave an ID as a deposit. You are also required to wear a safety hat for safety measures, since construction still takes place. The temple is open daily from 8.00 a.m. till 5.00 p.m. with the entrance fee costing 500 baht per person.